We Defeated the WRONG Enemy

Allies sided with the Commies Germany was fighting WW 1&2.

Though few understand this it has been known for 7 decades that the Commies Germany  was fighting and America/Britain sided with won the Wars of the 20th Century and others post and prior.

Britain framed Germany in order to get US into a War w/Russia and France against Germany so that Britain could benefit financially. Names names of Rotties and others involved. 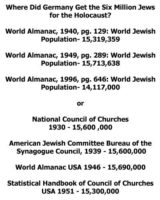 How Canada was sold to the Commies

I'll cite Merkel is AH's daughter as exhibit C
Merkel born 54, AH "dead" 45
and this pic taken in 37 17 years before Merkels birth can not be her pic.twitter.com/NXq24T4gsL